Professor Dr. G. Hussein Rassool is the Dean for the Faculty of Liberal Arts & Sciences and Head of the Department of Psychology. Professor Dr. G. Hussein Rassool holds a Ph.D. in Psychology and Education (University of London), M.Sc. in Health Education, and a B.A. in Psychology. He is an academic advisor, independent consultant in addiction and mental health, and Clinical consultant/ Executive director Islamic Online Counselling Service. He also works part-time as an Islamic psychotherapist. Professor Dr. G.Hussein Rassool has been a visiting professor of psychology of addiction and mental health at the University of Sao Paulo, Brazil. His previous experience was as a Senior Lecturer at the Department of Addictive Behaviour & Psychological Medicine, St George’s Hospital Medical School (University of London), England where he developed many unique academic programmes. He is a Fellow of the Royal Society of Public Health and served as News Editor/Editorial Board Member of international journals in the UK, USA and Brazil. He is an author /editor of eight books and has published over 100 papers and reviews. Some of his published books include Cultural Competence in Caring for Muslim Patients; Addictive Behaviours: Theory & Clinical Practice, Alcohol and Drug Misuse, Dual Diagnosis and Islamic Counselling. His forthcoming book is on Evil Eye, Jinn Possession and Mental Health: An Islamic perspective (Routledge)

Dr. Francesca has a PhD in Systemic Neuroscience, a Master in Neuro-Cognitive Psychology and a Bachelor in Cognitive Science. She has worked in scientific research in the USA, UK and Europe. A Muslim since 2010, she is interested in teaching modern scientific topics while keeping in mind the classical Islamic wisdom.

Sr. Bela Khan is a certified life coach, speaker, and author. She is pursuing a Master in Psychology and holds an M.Phil Degree in Microbiology. Furthermore, she is the founder of Muslim Women Empowerment, an institute that empowers women to move past their challenges and lead a life of purpose. Sr. Bela is a lifelong learner. She has many certifications in the field of leadership, success, and human behaviour from leading institutes of the world. Additionally, she has completed her Bridge Diploma in Islamic Studies from the Islamic Online University as well as diplomas in Quran Tafsir and Hadith Course from Pakistan. Teaching the concepts of psychology and human behaviour in the light of divine principles of Islam is her specialty. She conducts personal development workshops and training to help people take their lives to next level and become better versions of themselves.

Sr. Kashmala Qasim is currently pursuing a PhD in Psychology at York University, with an emphasis on community engagement research. She holds a Master of Science in Health Neuroscience from the McMaster University/St Joseph’s Healthcare, Hamilton, Canada, and a Bachelor of Science in Psychology Specialist (Co-op Program) from the University of Toronto, Canada. She has an extensive research, knowledge translation, clinical and teaching experience. She conducted oral presentations at several academic conferences; and has an experience with speaking to a diverse audience of international medical professionals, researchers and students. Sr. Kashmala received an “Outstanding Oral Research Presentation” award within the Department of health sciences, McMaster University (2013), and “Teaching Assistant Excellence” awards for undergraduate teaching (2013). Sr. Kashmala is currently leading a knowledge translation project at the McMaster University.

specialist psychology track/minor in Islamic Studies.  He is currently an Adjunct Professor of Psychology at Argosy University Chicago, American Islamic College, Hartford Seminary, instructor of psychology at Islamic Online University and founding director of Khalil Center – the first Islamically oriented professional community mental wellness center and largest provider of Muslim mental healthcare in the US. He is also a fellow at the Institute for Social Policy and Understanding at the Global Health Center, conducting research on topics related to Muslims and Mental Health.  Hooman Keshavarzi is a national public speaker and trainer currently serving as a Clinical supervisor of graduate students of clinical psychology at the Village of Hoffman Estates (DHS). He also delivers seminars on specialized topics around multiculturalism and psychology. Hooman Keshavarzi has also authored several published academic papers in recognized peer-reviewed journals on integrating Islamic spirituality into modern psychological practice. In addition to his academic training, Hooman Keshavarzi has studied Islamic theology both formally and informally. He is a student of Shaykh Muhammad Zakariya from Toronto, Canada, where he attended his hadith and spiritual discourses for a number of years. After moving to Chicago, he studied informally with Shaykh Azeemuddin Ahmed. He did some coursework with Shaykh Amin Kholwadia in Islamic counseling and formally studied for a year at Darul Qasim. He then moved onto study at Darus Salam foundation, completing three years of Islamic education and where he is continuing his Islamic studies.

Sr. Saba Sajjad holds an MPhil in Psychology from the Quaid-e-Azam University, Islamabad, and a Diploma in Homeopathic Medicine and Surgery (DHMS). Currently  she is reading for a PhD at Quaid-e-Azam University Islamabad, Pakistan.  Her PhD dissertation is on “Role of familism and well-being in successful aging of nuclear and joint families: An intergenerational approach”. My area of interest include Interpersonal Relationship, emotions, family ties, parenting, significant others and related variables. Her papers have been presented at national and international conferences. Sr. Saba is currently lecturing at the Govt. Post Graduate College, Gujranwala, Pakistan, and Soft Solution College, Gujranwala, Pakistan. 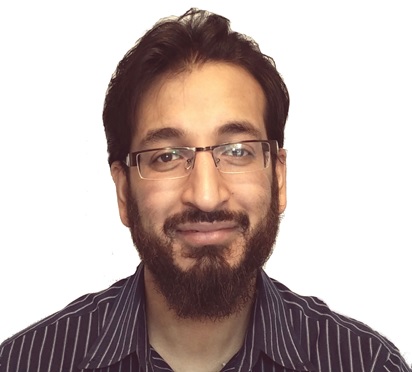 Usman Mughni holds a Master of Science in Marriage and Family Therapy and a  Bachelor of Science in Psychology along with a  degree in Diagnostic Medical Imaging. Usman is a licensed marriage and family therapist with extensive clinical healthcare experience, and teaching experience.  Br. Usman is a founder of and primary therapist at PeacefulYou Counseling Services, an organization composed of Muslim therapists and religious scholars addressing various challenges Muslim individuals, couples, and families  struggle with.

Sr. Hannah Morris, Hannah is educated to Masters level in psychology having obtained Masters in both Psychological Science and Health Psychology. She has a keen interest particularly in the fields of clinical, counselling and health psychology and is particularly interested in research and teaching in these areas of interest. Sr.Hannah has over 10 years of work experience in the field of psychology having spent much of her time working in health and social care settings. She spent a substantial amount of time working in secure psychiatric hospitals in the UK with offenders who have been diagnosed with severe mental health problems. She also spent a number of years working in residential care settings for children and adolescents with emotional and behavioural difficulties in both the USA and Ireland.

Dr. Farah Islam  is a postdoctoral fellow in the Social Aetiology of Mental Illness (SAMI) program at the Centre for Addiction and Mental Health and the University of Toronto in Toronto, Canada. She completed her doctorate at York University (Toronto, Canada) in the field of epidemiology. She explores mental health and service access in Canada`s racialized and immigrant populations, employing both quantitative epidemiology and mixed methods research. Dr.Farah Islam orients her research and community work around breaking down the barriers of mental health stigma.

Professor Dr. Malik Badri obtained his B.A. (with distinction) and his Masters from the American University of Beirut. He further obtained his Ph.D. from the University of Leicester, England and his Postgraduate Certificate of Clinical Psychology from the Academic Department of Psychiatry of the Middlesex Hospital Medical School of London University. Hewas elected Fellow of the British Psychological Society and is a Chartered Psychologist. In recognition to his contributions in his field he was awarded an honorary D.Sc. from the Ahfad University and was with the medal of Shahid Zubair which is the highest award for academic excellence. Professor Badri hasbeen  Professor and Dean in various universities including Dean of the Faculties of Education in the University of Khartoum and Juba University and the Acting Dean of the International Institute of Islamic Thought and Civilization of the International Islamic University,Malaysia. Professor Badri also served as senior clinical psychologist in a number of hospitals and clinics in the Middle East and Africa and was the founder of the Psychological Clinic of the University of Riyadh, SaudiArabia.  He was  Holder of the prestigious Chair of IbniKhaldun in the Faculty of Revealed Knowledge and Human Science of theInternational Islamic University in Malaysia. He has published widely inpsychology and education and his works has been translated into many languagesof the Islamic world. His research  interests include: Psychology, ClinicalPsychology, Cognitive Behaviour Therapy, Islamic Psychology, Social Psychologyand Islamic Studies.